Sodexo, world leader in Quality of Life Services, has elevated its position as one of the most sustainable companies in the world by earning awards in all three of the categories in RobecoSAM's annual "Sustainability Yearbook 2016" as the Industry Leader, Industry Mover, Gold Class distinction. 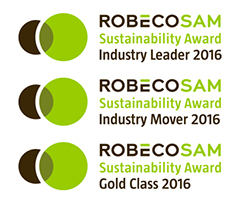 For the ninth consecutive year, Sodexo has been ranked as the best-performing company for economic, social and environmental performance in the Restaurant & Leisure Facilities sector.

In 2015, the company received the Industry Leader and Gold Class awards. New this year is the RobecoSAM Industry Mover, which is presented to the company that has achieved the largest proportional improvement in its sustainability performance compared to the previous year.

"We are incredibly proud to have received top ratings in all three categories this year in RobecoSAM's prestigious ranking," said Michel Landel, Sodexo CEO. "The Industry Mover award is a humbling and motivating validation that we are defining what it really means to be sustainable and socially responsible in today's global market."

Sodexo earned the highest overall score in its peer group, 80 percent (compared to a sector average of 43).

This level of recognition for outstanding achievement within the sector can be attributed to ongoing efforts by the company to source sustainable seafood in all 80 countries where it operates, as well as reduce its carbon emissions by 34 percent by 2020, with a particular focus on its supply chain and supporting its clients’ own carbon reduction efforts. Sodexo has been working with World Wildlife Fund (WWF) to develop and deploy scalable best practices that reduce environmental impacts from its more than 32,000 client sites, including a program that cuts food waste and technologies that reduce energy use between 12 and 45 percent. Sodexo’s ongoing major commitments in terms of Diversity and Inclusion also contributed to this recognition.

"We are committed to engaging our suppliers, clients and customers in all cities, regions and countries where we operate to conduct business with the highest ethical, social and environmental practices, and to constantly strive to identify new sustainable solutions," said Neil Barrett, Head of Corporate Responsibility at Sodexo.

"Leveraging its own experience in sustainability management, Sodexo continues to serve as a valued partner to its clients in helping them achieve their own sustainability goals," said Manjit Jus, Head of Sustainability Application & Operations, RobecoSAM. "From an investor’s perspective, this type of strategic positioning is absolutely key in differentiating the company from its competitors, both now and in the future."

This yearbook is published by RobecoSAM, a leading asset management company focusing on sustainability investing. This year more than 3,000 companies were considered for inclusion in the yearbook, using up to 120 financial, environmental, social and economic indicators to evaluate companies in 59 industries. As many as 864 companies from 42 different countries participated in this year's assessment. The RobecoSAM Sustainability Yearbook is regarded as the world's most comprehensive publication on corporate sustainability performance, in part due to continually raising the bar for inclusion.

More about Sodexo and corporate responsability

Sodexo has consistently been a leader, topping the Dow Jones Sustainability Indexes for 10 consecutive years, ranking  #1 on the 2013 Top 50 Companies for Diversity list and named one of Fortune Magazine’s ‘Most Admired’ companies in the Diversified Outsourcing Services sector.

Sodexo is credited for its transparency and reporting. The company shares information on its sustainability performance, including the Global Reporting Initiative (GRI) guidelines, and its external auditors report.

To read the full version of the press release, please download the PDF.