Our positioning in the services industry is original and unique. It is what makes our brand different. In combining the diverse talents of our teams, Sodexo is the only company to integrate a complete offer of innovative services, based on over 100 professions.

Since its foundation by Pierre Bellon in 1966, Sodexo has been improving people’s Quality of Life. For 50 years, we have developed unique expertise, backed by nearly 425,000 employees in 80 countries across the globe.

50 years of improving Quality of Life

For the 50th anniversary of Sodexo, we are launching a series of videos tracing the evolution the company from a small start-up in Marseille to the world leader in Quality of Life Services, one of the largest French-founded international groups today. Every Monday until October, discover Sodexo’s story in a new light. Watch the video clips presenting the key moments in the company’s history from 1966 to 2016. You can also follow us on LinkedIn and Twitter to get the latest story!

What do Star Trek and Sodexo have in common?

The beginning of a long-term relationship with the CEA

A new step of the French space exploration with Sodexo

The conquest of the school market

The Eiffel Tower centenary and the acquisition of The Bateaux Parisiens

Jamaica and Sodexo’s first participation in the Winter Olympic games

The creation of Sodexho Marriott Services in the U.S. 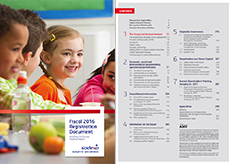